US aluminium scrap exports to Malaysia trend up through five months totalling 46,600 tonnes in August'22 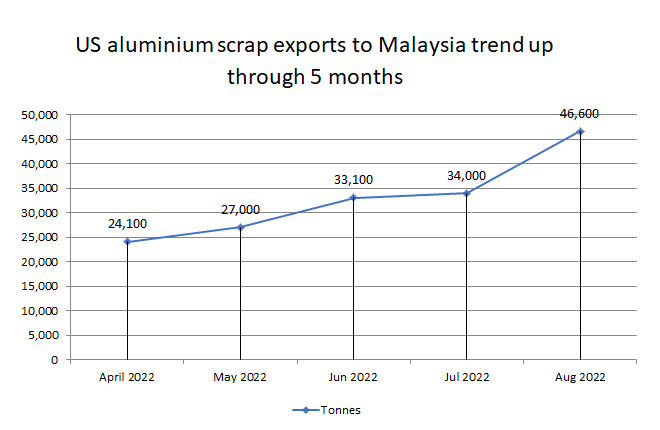 It would be interesting to note that the United States aluminium scrap exports to Malaysia kicked up post the March quarter of 2022 and since then rallied through August 2022. In June, the United States aluminium scrap export volume to Malaysia advanced from the previous month by 6,100 tonnes or 22.59 per cent, following a sequential increase in May by 12.03 per cent from 24,100 tonnes to 27,000 tonnes.

However, on a year-on-year calculation, the United States aluminium scrap exports to Malaysia in August 2022 recorded a decline of 18.10 per cent from 56,900 tonnes.

From January to August, the United States exported 249,000 tonnes of aluminium scrap to Malaysia, down by 26.33 per cent from 338,000 tonnes during the same period last year.

DIAMOND PACK packing & filling Factory is a leading manufacturer of aluminum foil food containers and ovals in the UAE. We produced about 50 Tons of a...
Selling offer Sell 8 tons per month Recycled Aluminium