India’s aluminium scrap imports from the United States continued to decline in October 2022 by 2.39 per cent or 1,000 tonnes month-on-month to peg at 40,800 tonnes, found the US Census Bureau data. In September 2022, India’s aluminium scrap import volume decreased by 9.33 per cent or 4,300 tonnes M-o-M from 46,100 tonnes to 41,800 tonnes. That indicated India’s imports from the United States declined for the second month but at a slower rate. 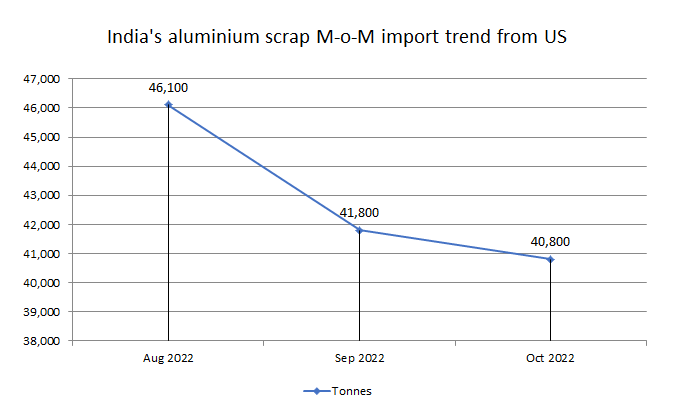 On a year-on-year calculation, India’s aluminium scrap imports from the United States edged a sharp decline of 15,600 tonnes or 27.66 per cent from 56,400 tonnes.

From January to October 2022, India imported 397,000 tonnes of aluminium scrap in total from the United States, up by 13.11 per cent from 351,000 tonnes year-on-year despite the back-to-back drop in September and October.

During January-October 2022, the United States aluminium scrap exports summed at 1.68 million tonnes – 1.75 per cent less than 1.71 million tonnes during the corresponding period of the previous year.